I'm now engaged to an American-African. Identity is a fickle thing, legal, social as well as individual.  That's how, after a long and lovely relationship I asked an American woman to marry me. A few short months later, I found myself engaged to a resident of Africa.

A lot changed, and nothing. After the painfully slow machinations of the government Erin got her Kenyan work permit.  That means, at this moment she is legally a resident of two different East African countries. I'm being facetious, but not entirely. Most African-Americans have a much smaller personal connection to Africa than Erin and I do.  At this point we've spent about 5% of our lives in Africa, but most African-Americans haven't stepped foot on the continent, nor have any of their ancestors in living memory.  At what point does ones physical location completely define ones continental or national affiliation?

For me, calling Erin an American-African is an amusing play on words, but for others these kinds of distinctions are vitally important.  I have a good white South African friend here who has told me a bit about his experiences.  During the crumbling of Apartheid in his country the white people had a lot of deplorable reasons to maintain their stranglehold, but they also had some legitimate concerns.  As the black majority began to flex their strength some advocated 'pushing the settlers to the sea.'  That's made for a powerful sentiment, but the reality of it was complicated.  Many parts of Africa had been heavily colonized well before North America was, with the first Dutch settlement established near Cape Town in 1647.  So these settlers had no other homeland since well over a century before my country got around to existing.  Even most black South Africans aren't 'native' depending on how one chooses to define it. The majority of the black populations ancestors moved in from other regions in the north about a 1000 years ago (which means it's closer to today than it is to the time of Jesus).  That's a long time, to be sure, but their people have only been in the region for less than three times the as long as the Europeans. 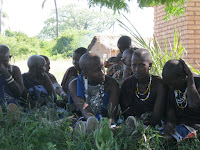 This fear of being 'pushed to the sea'  is why my friend said 'no white South African in his right mind would have voted for Mandela' (in 1994.) What happens to someone who doesn't have a right to exist anywhere on earth?  My friend quickly followed up his assertion by saying 'but then, Mandela's presidency was nothing short of a miracle.'  Balancing the opposing demands and rights of the whole population looked to be an impossible achievement, but one that has (with some hiccups) come into being.

I focused out South Africa only because it built to a crescendo within my life time, similar stories play out all over the continent.  I spent a a month living on a farm in Tanzania with three generations of farmers.  Although white, they easily identified themselves as Tanzanians in every way that matters.  Serious debates about who 'belongs' in a place is also an active issue in Kenya today.  During the colonial era tribes were pushed around as English settlers claimed vast swathes of land.  In many cases, entire tribes uprooted and moved to the ancestral land of other tribes.  Today on one side you have some angry that they have rights to land because their recent ancestors lived there.  On the other hand, todays residents also justifiably say they have rights to it because they have lived there for generations.

Identity and legal residence has been a vital issue for me too.  There was a time, while Erin and I were living in Tanzania, that I was an 'illegal.'  My visa took a long time to process through, and in the meantime the clock had run out on my three month 'Tourist Visa.'  Suddenly I had to live with the constant fear that if someone chose to make an issue out of it I could be deported on a moments notice.  Although I'm happy to still have an American passport, I didn't have as much to return to as my home, vocation, worldly goods and Erin were all in Tanzania.  If I was robbed, I would have had to seriously debate going to the police because the cost to me could have been far worse than what would happen to the actual criminal.

Suddenly I had a lot more empathy for the illegal immigrants in America.  Although they always disgusted me, I now understand the horror of the recent anti-immigrant laws in Arizona and Alabama.  For me, at least I made the decision to come to Africa as an adult equipped to deal with the consequences.  For immigrant children who know nothing but life in America, and want to contribute, their nebulous status is not only dangerous and economically stupid, it's profoundly immoral too.  But it certainly gets worse, at least children born in the US are automatically granted citizenship, this is not true elsewhere.  In China and Switzerland, for example, you can have multiple generations of immigrants born in the country.

The point of this post is to show that, ultimately, our concepts of nationality are fundamentally arbitrary and based on the flawed rules of men not any higher morality. Congress could easily eliminate millions of criminals from the country by simply making their immigration legal. Those freshly minted Americans would have the prospects to add more to economy, serve in the military, pay into social security, and consider the police allies not enemies. It may seem outrageous today, but I see it as inevitable evolution.  Our modern ideas of nationality aren't new, the first evidence of something comprable to a passport was in the Persian empire in 450BC.

If we are indeed living in an era of globalization, it's tragically amusing that we're struggling with problems that exist largely because of concept of nationality established two and a half millenniums ago.